The first spooky books I read were R.L. Stein's Goosebumps series. I'm betting this is true for a lot of you! Not really being into horror at a young age, besides the occasional collection of short ghost stories, my only other major spooky reads were the Star Wars expanded universe Galaxy of Horror books.

I did also watch Ghost Writer, the TV show with a haunted typewriter. I think that's the first horror show I really got into.

Until I saw the Sixth Sense, I pretty much stayed away from horror movies. I wasn't (and am still not) a fan of the hack-slash style of movie, which were the only horror movies I'd seen before, and that was my first psychological horror movie.

What were your first spooky favorites?
Posted by Rebekkah Niles at 10:00 AM No comments:

So between caring for a plane-crud-recovering husband and a kitty recovering from surgery, I'm afraid I haven't managed a post for this Friday, but hope everyone has a good weekend. Rapid healing all around! 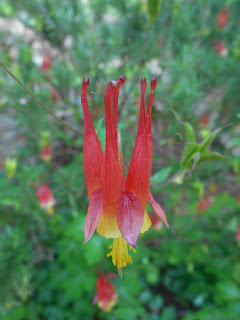 Missed Friday and Monday's posts due to being in Taiwan. Great vacation! Also, the tea was amazing. One of the things we did there was visit the tea museum at a tea farm, and at the end of the museum visit, we got to enjoy a couple of tastings.

First there was the teacup warming, where she poured hot water into the pot and cups.

Then she added the water to the tea, pouring from high to let the water cool down before it touched the Oriental Beauty tea. The unique flavor of the tea is produced by the insects that nibble it, starting oxidation while still on the branch.

Then she poured out tea into sample-sized cups, and rebrewed the leaves.

The tea is a beautiful honey color, which is also the flavor that develops, a fruity-honey flavor.

For our second tasting, we enjoyed a high mountain oolong.

The shop also had pamelo teas, which are made by hollowing out a pamelo, mixing the insides with tea, boiling the mixture several times, and repacking it back into the pamelo skin to season. It's also known as the 18-year tea, as it was often done as part of a girl's dowry: The tea was prepared for a baby girl, and left hanging by her bed until she married. The idea was that, since the tea is supposed to be very healing, if she got sick when she was a newlywed, she could drink some pamelo tea and be able to continue adjusting to her new life. I took some home (in tea bag form), and drank it to ward off plane crud that my husband caught, which seems to have worked so far. It's quite good, a fruity oolong tea that holds up the flavor for at least three brews.

I also learned that Oriental Beauty tea is called that because the queen of England dubbed it such, thinking of the beautiful cheongsams from the East. Before that, it was called formosa tea. And in Chinese, it was known as "boasting" tea, or "puff" tea, because to create this tea, the tea leaves are attacked by insects. This results in a crop that is withered and sad-looking, often appearing half-dead in the fields. Therefore, when the growers marketed it at exorbitant prices, buyers would accuse them of exaggerating, due to the ugly-looking nature of the leaves in the field. But the fruity-honey taste won them over, and today Oriental Beauty tea continues to be sold at incredible prices for the best leaves.

In fact, the tea farm guide told us that their quickest-selling teas are the most expensive ones; they were already sold out of the premium two teas! So we only got to try the third-best. But I must say, it really does taste like honey, especially by the fourth or fifth brew.

If you get out to Taiwan, schedule a tea farm into your trip. It's amazing.
Posted by Rebekkah Niles at 10:00 AM 3 comments:

Email ThisBlogThis!Share to TwitterShare to FacebookShare to Pinterest
Labels: tea

All these books have a power void, a question of regal inheritance and who owns the right to the throne. Something about royalty intrigues us, secret princes and princesses and power struggles being a trope that never actually goes out of fashion.

Which, from the viewpoint of living in a democracy with no acknowledged aristocracy or royalty, seems a bit strange. I suppose it's not much different from the Billionaire craze: there's that underlying desire to be incredibly wealthy, and incredibly important. And "Who should rule" isn't just limited to kings and queens, but also to political factions--the Rebellion in Star Wars, the Weyr leaders in McCaffrey's books, the rebels in the Hunger Games.

I guess people just like politics in fantasy. It even shows up in stories I'd call epic fantasy instead of political fantasy. Lord of the Rings has Aragorn. The Belgariad has the rightful ruler Garion.

Which political plotlines in fantasy stories have you enjoyed the most? What do you love about them?
Posted by Rebekkah Niles at 10:00 AM 2 comments:

You've probably guessed I'm a fan of tea by now. Morning has a hard time happening without it.

Lots of people swear by coffee, too (those brave souls). The intent of waking up via caffeine is a cultural icon, and although I know people who drink neither, and some who drink one or both but neither in the morning, what we think of when we hear coffee or tea is "morning palliative."

What are your favorite fantasy substitutes for tea or coffee? Have you ever tried a recipe meant to replicate the taste?
Posted by Rebekkah Niles at 10:00 AM No comments: 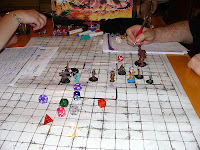 Have you ever made your characters' decisions matter in a pre-made d20 game? How did you do it, and how did it affect the game?
Posted by Rebekkah Niles at 12:00 PM 2 comments:

This week's publishing news and industry blogs post covers 9/24-10/6/16. It's been a quiet couple of weeks, all told. Guess everyone's starting to clear their plates with NaNoWriMo on the horizon?

Agent Janet Reid answers questions and offers advice. Does your book's political affiliation hurt your changes of being published? (Not really; agents and readers are pretty diverse too; it's about the writing.) Tired of waiting for a response from an agent; should you just self-publish after a few months? (Why are you only querying one agent? Also, agents have long timelines; if you want self-publish then do so, but not because the agent is responding quickly.)

On the Editor's Blog, mistakes that pull readers out of the story. Never break the suspension of disbelief!

At the Futuristic, Fantasy, and Paranormal blog, how to dump the info dump.

On QueryTracker, an explanation of show don't tell: Don't explain. Just make it happen. Also, how to handle a critique.
Posted by Rebekkah Niles at 10:00 AM No comments:

My apologies for missing not one, but two posts last week! Unexpected things that needed to be taken care of.

One thing that bugs me about a lot of series is the lack of endings. Endings are very satisfying, that which completes a story, and without a good one, you're left begging Fox for season two of Firefly for a couple of decades or more. I mean, you feel like there should be more, because it's incomplete. I like a good series myself, but when the series never ends, never really completes a season, and never has a good wrap-up point... well, unless you're writing Doctor Who, it bothers me. (Doctor Who should never end. Also, it does provide endings in the form of completing seasons, and ending companions, and Doctors.)

The alternative poor ending is the over-ending, like when you've watched a movie and you think it's over, and then there's another scene and it's clearly the ending, no wait there's more, and really now's the--nope, another scene.

It's a balancing act to write a good ending, in other words. Something that wraps up a story well, and caps it off. I'm fond of Branden Sanderson's Mistborn series ending, as did Madoka Magica (the anime). I guess the best way to perfect an ending is to practice, write a few, cut them down until they're better, and repeat. Also read a lot of good books that really nail the ending.

What stories have you read, watched, or played that got the ending right?
Posted by Rebekkah Niles at 10:00 AM 3 comments: