The 5 best things about getting home from vacation

The 5 best things about getting home from vacation:

5. Taking a hot shower after a long plane trip.
4. Seeing home.
3. Sleeping in your own bed.
2. Experiencing the joy your pets show to have you home.
1. Sharing the stories with friends.

Book cover trends are often different around the world. Sometimes foreign covers are close to American covers, or are the same. Other times, they're quite a bit different.

Some of these Taiwanese covers of American books seem virtually identical. Others have slight differences. 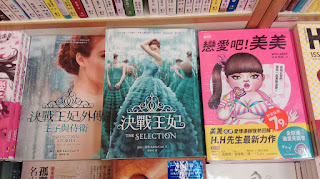 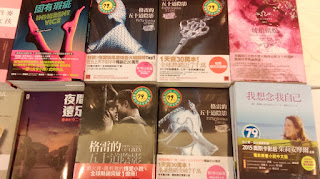 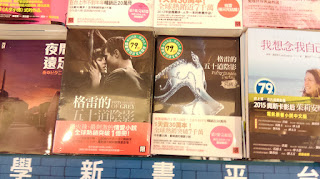 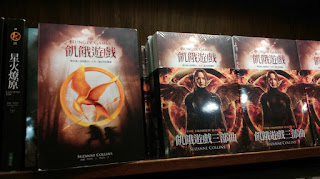 Genre book covers have different trends in general, though. Check out these Chinese historical romance covers. 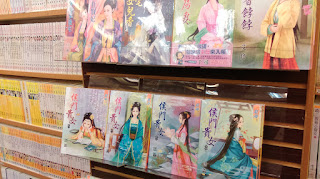 Other titles have been changed to have rather different covers. 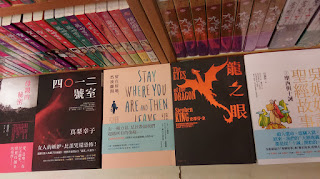 And if you drop by the foreign language section, you can find treasures such as The Little Prince written in Chinese, English, and French (in one book) for language learners. That one is pretty cool, if you ask me. 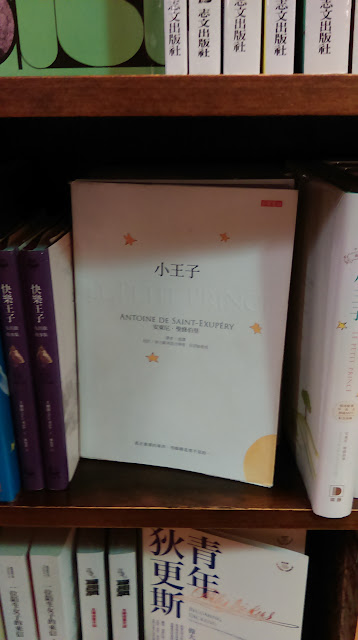 Have you seen the foreign covers of any books you own? How are they different from the version you have?

It's a pretty good reminder, to an author, that when preparing a book for a foreign market, it'll take some research to find the right cover. It's also a reminder that you need to check the nationality of your sources for cover design when you're making your own covers: Is this advice for my market?
Posted by Rebekkah Niles at 10:00 AM No comments:

You know what movies never really quite give you? The real thing. Every writer can tell you that research sometimes can only happen through experience. Things like experiencing traversing a secluded* river in wild countryside can only be truly understood by trying it (*secluded besides the pair of trekkers who caught up and passed us during lunch, or the group that goes every weekend--hey, it was a weekday). Overcoming the danger of a raging river (okay... fairly calm mountain spring) and clambering over unmarked trails (please ignore the experienced guide) while fighting off wild mountain animals (wetsuits are great for not getting leeches) is a powerful experience, and if I ever use it in book, I know I can now describe the experience well. (What? No, of course writers never use "research" as an excuse for a fun adventure).

I love books, but no book has ever given me the sound of water pouring rocks, the icy grip of mountain river, the sound of crickets and cicadas and frogs singing around you and birds above. Nothing ever matches the real experience.

It's easy to forget to make time for things outside the normal routine, and yet it's important to do so. A future father-in-law with a taste for extreme sports helps, but you don't have to try anything extreme to enjoy the world. A walk through a beautiful garden, a flower photo shoot, the game Ingress, a hike at a popular hiking trail... anything that gets you outside and into the world.

I joke that adventures are great for research, but the truth is, they're good for the soul and body, too (as long as you're careful and use proper safety equipment). Creativity involves combining real-life experiences with imagination, and the more things you do, the more you get out, the deeper your pool of experience to draw on. And sitting around writing all day... well, it's no secret sitting all day isn't great for you.

And it's fun. That's pretty important, too, because mental health is part of your whole health. The more good times you make time for, the more good memories you have to buoy yourself through the rough patches. Because everyone has times when life just sucks. Make sure you remember to make time for more good moments than bad ones.

River trekking goes on the list of "good" moments for me. What are some of your best adventures?
Posted by Rebekkah Niles at 10:00 AM No comments:

I hear a lot of new authors making scathing commentary on poorly-edited books that have made best-selling lists.

Or maybe it's because they know that for a book to be wildly successful, it has to have virtues. And whatever those virtues are, they sell well.

There are published books I highly dislike. Books I can't even finish reading.

But I've read a lot of fanfiction in my time, and that's... uh... let's just say quality varies far more than what's on the commercial market. Some was of exception quality and would have made epic storytelling by any judgement. Some was written by talented teens, with lots of promise, and a polish away from professional. Others, well, fanfiction is a great way to get practice writing, and to learn the basics.

I mention fanfiction because of what it taught me: At the end of the day, you don't know what will be popular, but everything that becomes popular, becomes so for a reason. Sometimes the grammar is terrible, but the story's so good I kept reading anyway. Other times, the characters were stereotypical to the point of accidental hilarity, yet the plot was intriguing enough I still wanted to know what would happen.

If you learn the reason is someone keeps reading despite an obvious flaw, you can improve your own writing immensely. So pick up books with obvious flaws and read them. You don't have to like them; you just need to learn what others see in them.


The reason people read isn't because they like badness. That's called heckling, not reading. No, people read because something in the story appeals to them. Maybe it's the compelling storyline. Maybe the author has an ability to create emotional connections to characters so compelling it's hard to put the book down, or a love story that intrigues and enraptures to the point that storytelling flaws become unimportant.

Figure out what it is that a "bad" book (otherwise known as a book you dislike) does right, and you'll find a way to make your own writing better.
Posted by Rebekkah Niles at 10:00 AM No comments:

Email ThisBlogThis!Share to TwitterShare to FacebookShare to Pinterest
Labels: tips

A couple of fun videos today, since it's Friday and Fridays should be awesome and fun.


First, a Radioactive remix by Lindsay Sterling and Pentatonix:


And if you've ever wondered how everyone else feels about Link's rupee-hunting exploits, well...


Have a great Friday!

There's something addicting about watching people try new things. Especially foods. If you have a few hours to lose, check out Buzzfeed's People Try series.

Here's a good one to get you started.


Do consider yourself warned: many of these are extremely NSFW, and several I skipped for being a bit too... uh... but all the ones I watched were hilarious.
Posted by Rebekkah Niles at 10:00 AM No comments:

In the UK, the rumor is that Penguin Random House and Amazon UK are having a terms dispute. 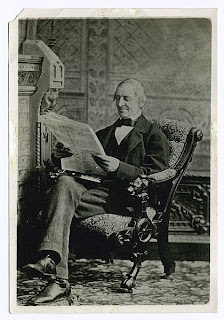 JD Salinger has three short stories in the American public domain--which a publisher is packaging and trying to sell to foreign markets. Salinger Literary Trust disputes, and the courts are looking at the impact of individual foreign countries' take on public domain rights as compared to US rights. Since European countries typically have longer life of copyright than American copyrights, but there's an unequally enforced statute that the country of origin's copyright lifespan should be used, the decision could possibly impact the US's take on global public domain policy.

Agent Nephele Tempest posts a group of Friday Writing Links for 5/22 and 5/29.

Agent Janet Reid gives advice and answers questions. She shares an insightful post on writing a great synopsis. Is it okay to mention that you really like the agent/editor you're querying, or is that unwelcome? (Be specific about what you like, but sincere thanks isn't a bad thing.)  You don't like a potential agent's voice or phone mannerisms, despite that they're not rude or particularly bad; is that a legit reason to turn them down? (No. If they've got a good rep and are well-established, the editors who matter are already used to her voice.) Is 6 weeks long enough for an edit and requery? (Not really, a revise and resend takes a lot of work. And not just cleaning up some stray grammar.) How important are websites for queriers? (Not so much for Reid.)

Agent Kristin Nelson offers insight into the Publishers Markplace Deal Lunch subtext: What does each adjective used to describe a deal mean? And what does it mean when no mention is made of an advance?

At BookEnds Literary Agency, a new agent joins the crew. Advice on how to choose what to wear to a conference.

Agents at Books and Such Literary Management share some advice. Wendy Lawton explains why sometimes, when an agent is sitting on a manuscript, it might be the smartest move for the author's career. Rachelle Gardner explains 6 factors in deciding which publisher to go with when offered multiple deals.

Author Kristine Kathryn Rusch reflects on John Scalzi's $3.4M deal with a traditional publishing company, and points out to those who criticize that Scalzi did what he felt was right for his own career--publishing isn't a one-size-fits all, after all.

Fiction editor Beth Hill reminds that often cutting big parts of a manuscript actually adds to the story. If a chapter doesn't feel like it fits after revisions, maybe it's time to cut the whole chapter; you book might have changed enough that less has become more for that particular plot bunny.

When it comes to image file types, which should you use? CompanyFolders gives an infographic explaining when to use which, and also explain in detail, breaking down with a description of each type of image and where it comes from/what it's used for.

How popular is Wattpad? Apparently it has, monthly, more than 40 million people using the site. (in math terms, that's p>40,000,000, and yes, I wrote that out because it's a lot of zeros and I like math and maybe it's getting a little too close to my bedtime as I write this post).


What major publishing news have you encountered in the past two weeks?

(The next news post will July 3, so it may be broken into two parts, or longer than usual. Regular news posting schedule will resume afterwards.--See you then!)
Posted by Rebekkah Niles at 10:00 AM No comments: