Publishing news will be late this week.

I find myself thinking about beautiful mosaics this week, such as this one in Praiano, Italy: Don't know why that's on my mind, just a piece of interesting artistry seen on my honeymoon that has stuck with me.

Of course, the natural artistry of the town (i.e. its view) is also spectacular.

Speaking of gorgeous natural and man-made scenery, there's a place much closer to home with a view, in Edenton, NC. 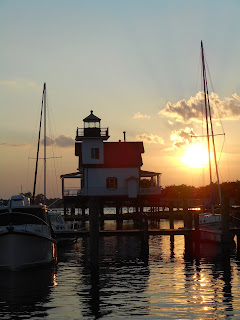 It's a lovely little town, full of kind people (who are willing to help a bride and groom on the way to their wedding with a broken-down car!), and has a beautiful salt marsh lighthouse. If you ever go through there near sunset, head out onto the boardwalk and see the lighthouse lit gold under an umber sky. If you're early, check out the Soda Shoppe and get yourself some ice cream.

What's something beautiful you've seen, or always wanted to see?

Hope you have a good Friday!
Posted by Rebekkah Niles at 10:00 AM No comments:

The new Amazon "feature" that allows third parties to "win" the buy box draws ire from publishers, booksellers, authors, and more. Parties who "win" the box become the default purchase option (the books must be offered in "new condition" to qualify, and usually are lower prices than the publishers retail); other sellers are still present but get pushed further down the list, sometimes not automatically shown without clicking for more options.

The Authors Guild and the Independent Book Publishers Association issue statements against the new Buy-Box policy, pointing out that as customers become by default more likely to buy from third-party sources, authors and publishers lose revenue if the books are obtained from suspect sources (and many parties worry this is likely the case). There are worries that the move also cuts deeply into authors' backlist profits, and the AG and the IBPA speculate (albeit without evidence) about possible future preferential treatment for Amazon's print-on-demand services.

A bookseller sues the state of California over a new law that requires all autographed items sold and valued over $5 to have a certificate of authenticity, with the paperwork backing it, or face liability of substantial penalties, on the grounds that the law makes selling autographed books a substantial burden and violates the First Amendment.

The European Commission introduces new laws on e-book sales in the EU. Amazon must drop its "most favored nation" clause from European contracts; countries can set VAT for e-books to lower levels; geo-blocking is banned (which prevented a customer from buying an e-book from another country to get around licensing restrictions). The first two are lauded by booksellers, while the latter is being considered a matter of concern.

The latest proposed U.S. budget includes increases in the budgets for the National Endowments for the Arts and Humanities--a complete reversal of the previous proposed budget to eliminate them.

More coverage, analysis, speculation, and reactions about the Amazon Buy-Box policy from Huffington Post,  Publishing Perspectives, Books & Such,(which all decry the move as being bad for authors and worse), and the Digital Reader (which blasts the other articles and offers a counter perspective that the move is pro-consumer and pro-competition).

On Writer Beware, Strauss covers the felony charges brought against the CEO and founder of Tate Publishing & Enterprises, a known vanity publisher, for fraud, extortion, and more. Authors who have complaints with Tate who have not been contacted yet or submitted complaints can still do so.

Agent Nephele Tempest posts writing links for 4/28 and 5/5. Of particular suggestion is Aerogramme Writers' Studio opportunities for writers for May and June. Oh, and a reminder that writers write, but published authors finish.

Author Nathan Bransford posts a This Week in Books for 4/30 and 5/5. He also posts some interesting analysis of query acceptance stats.

Agent Jessica Faust defines synopses and blurbs. She also asks if you really need that prologue--and why there are books still get sold with prologues, even though agents all claim to hate them (hint: it's because yes, they really needed the prologue; and also the prologue really worked).

Agent Janet Reid answers questions and gives advice. If an agent requests a pitch for a book they've previously turned down, should you send it? (Yes.) You've got an offer and you're at the point of asking clients about the agent to see if you'd get along--what do you ask and how do you ask it? (Ask agent for best contact info, but probably e-mail; and how agent is to work with.)

On QueryTracker, the difference between "And then!" plots and "And therefore" plots, and why to avoid the first.

Writing a medical romance (or a novel of any genre in a medical setting)? On the FF&P, suggestions for getting your details right and writing a hospital setting correctly.

Publishers Weekly looks at the success of women in the indie publishing industry, compared to traditional publishing.

What other major publishing news have you encountered in the past couple of weeks?
Posted by Rebekkah Niles at 10:00 AM 2 comments:

Something about May calls busy-ness and calendar claustrophobia, the sensation in which one looks at the calendar and sees so many of the dates filled that it brings a sense of time closing in like falling cavern walls. 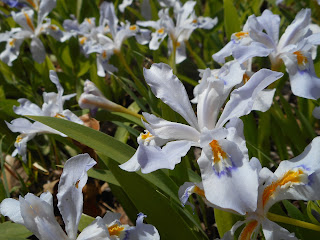 But after the cold has locked away the winter, and drudging through the early spring rains has left everyone locking themselves away to avoid the damp, the warm flowery touch of spring evokes a socializing frenzy. People burst free of their isolation and want to greet and play. And of course spring comes with bittersweet goodbyes as the end of a college year leads to masses of motion, followed by joyful hellos at returning friends.

It's meet-and-greet-and-farewell strawberry season, with sweet sunshine lingering through the evening, making days seem longer and giving the illusion that time is eternal. Stagnated bikes and hiking boots see new light and winter weight gets thrashed by the energy of 9 o'clock sunsets. Bright sundresses one would not dare expose in harsh cold get donned again, and cute outfits beg for the see-and-be-seen, bright colors and cheerful fabrics echoing the cheer of flower-strewn sidewalks and trees and cracks in the pavement. Everyone has more verve and more vibrancy, and not using it would be like encouraging stale cheesecake and rotten mangoes, curdled milk and moldy filet mignon.

Spring is a march of hectic energy, a wild free-for-all of things that suddenly can be done again. And yet, it's also the lashing storms and winds of too-much, the deluge of things-to-do. It's vibrant celebration dogged by exhausted collapse, wild flowing rivers a little too close to the banks of human limit for comfort.

Some people thrive on it, and others enjoy it but yearn for the slower pace of sedate summer. Do your springs tremble on the edge of too much, or is it just right, the perfect soil to bring out your best blooms?
Posted by Rebekkah Niles at 10:00 AM 1 comment: