Publishers Weekly posts about current publishing industry top executive salaries, and the salaries of the industry as whole. Also, a look at how publishers plan to deal with the new overtime laws coming into effect in December, with the first most common choice being to limit time worked to 40 hours for affected employees who currently have a tendency to work over 40 hours, and second choice most common choice being to pay overtime.

On QueryTracker, a great blog on how to get and give advice about manuscripts--be nice in your critiques, and thank critiquers. Also a blog on using story structure as a tool for revising, and advice on writing well-rounded characters.

On The Editor's Blog, a nice link digest to various grammar posts. Also, a tipsheet on setting up auto-hyphenation for print works.

Agent Jessica Faust warns to beware when writing a trilogy or a series that readers waiting a year between books aren't lost by the time they pick up the next one.

Agent Janet Reid offers advice. She clarifies the difference between a platform and a website: volume kicks the website into a platform. She answers a question about why new agents are, in fact, worth considering signing with. And she explains what to look for in comp titles.

At Books & Such Literary agency, a reminder that when authors miss deadlines in traditional publishing, it costs people money.

Author Kristine Kathryn Rusch points out some cool opportunities for indie writers that have developed for writers since 2009.

When do you watch horror?

I'll admit it, as much as I enjoy horror movies, they scare me, and I often prefer the mid-day approach so I can sleep well at night. Nice bright sunlight for a few hours after, thanks, and I'll sleep much better.

Though if I'm with a group of people, a stormy night is good, too. As long as I can hang out with friends for a while afterward.

It's funny how we like to scare ourselves. And how people who like horror movies have different preferences for how they scare themselves. I'm a strictly psychological thriller, that's my thing--not into slasher movies at all. Yet that's not everyone's taste. 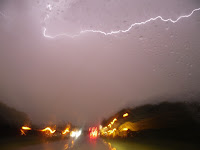 Others hate all of the above, but will sit for hours with a book of terrifying true crime stories.

People are weird. And we like to scare ourselves. So what's the best time to scare yourself? And what's your scare preference?

Legends and festivals and celebrations--pretty much every fantasy story I've read has a few. As does the real world.

The Mid-Autumn Festival is a harvest festival celebrated in China, Korea, and Vietnam (and anywhere else their diaspora live). One of the stories about its origin (much simplified) are about an archer named Hou Yi and his wife Chang'e. Hou Yi performed an act of heroism and was sent an elixir of immortality, but when he left the home, a treacherous apprentice tried to steal it. So Chang'e drank the elixir to keep it safe, but doing so made her fly off into the sky. She took up residence on the moon, and her devoted husband began the tradition of offering sacrifices once a year to her of her favorite foods.

My husband tells me his memories of these celebrations revolve around eating moon cakes and having barbecues.

Every culture has legends, has parties, has celebrations. Like in reality, the timing often coincides with major events, such as solstices and equinoxes and harvests and plantings. And what and how people celebrate tells you a bit about them, about how their society began.

When you begin to plan a celebration as a plot device, it's a good idea to know what the people in your world hold dear, and how they would celebrate. Food? Dance? Prayer? Offerings? Costumes? Usually parties of some kind! It's also a good way to kick up the detail in the world, perhaps work in some local legends, or even a touch of foreshadowing. And it can even help set the tone, from a macabre autumn celebration of death and honoring ancestors in a court where too much nostalgia for the past is treason, to a cheerful farmer's welcoming of a new planting and hopes of good things to come.

Have you seen celebrations used well to set tone in a work of fantasy? And were any legends about the holiday used to create setting?

Email ThisBlogThis!Share to TwitterShare to FacebookShare to Pinterest
Labels: writing 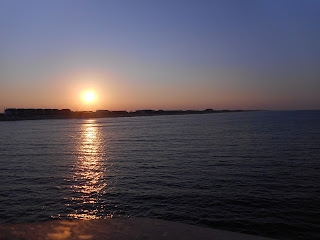 Bays, harbors, the seven seas, the open ocean: waterways connect and yet also separate the world.

I remember playing Cid Meier's Civilization games, many years ago, and having a love-hate relationship with oceans. On one hand, water-touching areas meant ports, which meant better access to exploring the the world. On the other hand, early-game play meant that oceans were barriers, limits.

This was a consistent pattern in games, actually: Final Fantasy VII, before you could cross water, it was a frustrating (if necessary) blockcade that eventually turned into open-world exploration later in the game; Chrono Cross, starting on a large island, with islands all around that you just couldn't explore (yet); even Legend of Zelda, Wind Waker, where the game is all about open-world sea exploration begins with being unable to leave your starter island.

Of course there's a reason for having a starter area. It's where you learn the rules, the functions, the basics. Your starter area teaches you what you need to survive in the greater universe and helps you level up enough that you won't immediately die the second you step out of your home base.

And the next few areas help you level up further, until you finally achieve your go-anywhere pass.

It's not far off from planetary exploration, either. Just substitute water for space and you have Kingdom Hearts. Or... Earth today. Makes you wonder, is humanity closing in on another Age of Exploration?

And if we're leveling up for open-universe exploration, what'll we find next? Guess we have to craft a few cross-universe ships before we can find out. Or whatever we use.

Hey, maybe we'll Stranger Things it instead of space travel, and discover the reason we've spent so long leveling is that there are some, uh, stranger things our descendants are about to encounter in other dimensions.

Fantasy stories often include either magical or herbal remedies for sickness and pain (often both, in fact). Pretty much every story I've read involves the hero being treated for wounds with poultices and bandages, or encountering some kind of magical healing that speeds her recovery from physical or magical illnesses.

Even Frodo Baggins had the elves to treat him, and if not for Aragorn's herb knowledge, he would have been tainted by darkness long before laying eyes on Mount Doom.

One of my favorite fantasy writers, Tamora Pierce, has a YA series centered around a group of youngsters living in a healing circle, learning to use their magic under the instruction and care of healing mages. They deal with pirates and plagues both, saving lives and finding each other.

The long-running classic Wheel of Time also has healers, a whole Ajah of women dedicated to using their powers for healing.  They also encounter and conflict with Wise Women, un-magical healers who use herbs and non-magic remedies to heal villagers.

And of course Healer Hall in Anne McCaffrey's world of Pern is a main location for the plot of several books, as dragonriders help find a cure for terrible plagues.

What are some of your favorite examples of healers in books?
Posted by Rebekkah Niles at 10:30 AM No comments:

Oh dear, this was a wee bit late. My apologies, an unexpectedly busy weekend interfered. This week's publishing news and industry blogs covers 8/20-9/5/2016. It's a bit light, as summer tends to be slow and some of the major sites I follow have been on vacation.

Agent Kristine Kathryn Rusch continues her Contracts/Dealbreakers series by looking at the agent clause in publisher agreements, things she considers dealbreakers in agent contracts, how to hire a lawyer, and a look at an actual contract, released due to a lawsuit, with a breakdown of the problems in it. (It is worth mentioning that Rusch is strongly against hiring agents and prefers hiring contract lawyers.)

On the Editor's blog, questions about writing in deep point-of-view are answered. No, if your protagonist wouldn't think in similes and metaphors, you can't get away with using them in deep POV.

A look at the current publishing industry in Hong Kong and China.


Also, because I missed most of last week, a few pictures for public domain:

Posted by Rebekkah Niles at 11:45 AM No comments: