What makes a game frustrating instead of fun?

It being the holidays with my family, board games came out. Of course, Friday we rearranged the six-person table and the card table to be more appropriate to an Arkham Horror marathon:

We tried the expansions, and found ourselves dead twice to the claws/tentacles/unmentionable horrors of Quachiluttus thanks to the additions of some expansions. Our guest told us that the expansions were created with the idea of making the game more challenging... but between the new, difficult-to-reach gates for portals, a short doom track, instant death, and an Ancient One that auto-killed one player each round and had both magical and physical immunity, I'm not sure it stayed in the realm of possible.

That's not to say it wasn't fun, because Arkham Horror is almost always fun if you've set aside the time to play it and enjoy the tactical challenge of trying to stop Cthulu-esque creatures from consuming the board game world. But it was demoralizing, and after two runs we came to the conclusion that we weren't interested in trying again with that boss.

We also played a few games of Airlines and Settlers of Catan. In both games, it's possible to get so far behind that you just can't possibly keep up. (They're also much shorter than Arkham Horror, if you don't have 4 hours to devote to a single game...)

It seems like most people who reach the point of impossible-to-win (who are reasonably good sports) fall into one of two camps once they reach this point: they cease having fun because there's no chance of winning, or they stop taking the game seriously and focus on enjoying the gameplay and time spent with the family. Both are frustrating, because no one in a game wants someone to not be having fun, and yet having a player who's no longer truly engaged in the game means they no longer make the smart moves, which can mess up the strategy and gameplay for everyone else. Or, they may the game "interesting" in the form of sabotaging certain other players (usually the best player/ leader), which can be amusing, but makes the game less fair.

Some games have ways to keep all the players engaged. They may offer secondary prizes, or have a "rubber-band" effect that prevents anyone from getting too far behind (which can be its own kind of frustrating). Or they may be designed so that you don't know who is winning until the very end. Cooperative board games are good in that by default no one can get shut out unless everyone does, so no one is hanging around hoping the game will end soon. But then, when everyone gets shut out, finishing the game becomes an exercise in futility, so it's frustrating for everyone instead of just some of the players.

But I find myself wondering, which do you think most makes a game cross the line from "fun" into "frustrating": knowing you can't win, not being able to know who will win, knowing that skill has less effect than luck, not being challenging enough, or something else?
Posted by Rebekkah Niles at 10:00 AM 2 comments:

I can now say I've hosted my first Thanksgiving, and if the crowd was a reasonable 5 people, they were people we love, and the oven was fixed by Monday, so the food still turned out edible, and nobody got sick, and I discovered a few good new recipes, and for this and many other things, I am thankful.

I hope your Thursday was great, and if you're in the US, you had a wonderful Thanksgiving!

Posted by Rebekkah Niles at 10:08 PM No comments:

It was a Sunday of plans gone awry. Not that it turned out badly.

Decided to do a test run for the cranberry brownies I’m making as dessert for my first year hosting Thanksgiving. This turned out to be a great idea, because our oven died. Better today than Thursday!

Of course, this meant we had a panful of brownie batter that was completely uncooked. Our plea for use of a working oven in exchange for brownies was quickly fulfilled. So instead of having an afternoon and evening at home doing laundry, we wound up having an impromptu game night.

So, yeah, sometimes things in life break, but it winds up being better in the long run.

The Anderson family has come a step closer to acquiring all the shares of Books-A-Million.

Audiobooks.com creates a self-publishing service for audiobooks, rather like Smashwords' service in that it distributes to multiple retailers and distributors.

Amazon and Apple are under an anti-trust investigation in Germany. (Link has sound)

Victoria Strauss on Writer Beware talks about the dangers of arbitration clauses, and what to look for in them, and clauses you can probably get to mitigate them versus what you can't.

Agent Nephele Tempest talks about the advantages of having a writing community, and how to find one.

Agent Janet Reid answers questions and gives advice.  Writing a non-fiction book that has its main relevance within a couple of years, and wondering if you should be querying now before the book is done? (Yes. Different rules for non-fiction, and timeliness is a thing.) A writer friend has died, and you wonder if you should notify query-ees, and also if it's possible to get the piece posthumously published. (An e-mail is polite, and not very likely.) She also shares inept book promo--and explains what's inept about it. And while you're out, how about how to query badly?

Agent Kristin Nelson gives an agent's perspective on how to succeed at NaNoWriMo. She also explains her #1 reason for passing even when the writing is good.

On the Editor's Blog, some tough love about your favorite, clever first-draft lines--like it or not, there's no sacred cow in writing; sometimes you just have suck it up and cut that line you thought you liked during rewrites.

On QueryTracker, why truth is important in fiction.

Author Kristine Kathryn Rusch reminds us why it's important to have contact information available and make it possible to get in touch with you.

Wondering about the brick and mortar Amazon Books store? Amazon Books VP doesn't plan to sell products other than books there; she explains how books will be chosen and displayed; and yes, they're hoping for more brick and mortars in the future. (I bet you'll probably see books from the Amazon Editors' Best Books lists among those selected.)

For a collection of NaNoWriMo tips, check out GalleyCat's Resources page.

What other publishing news have you encountered in the past two weeks?
Posted by Rebekkah Niles at 10:00 AM No comments:

Prayers for the World

The world grieves this weekend.

Terrorism and bombings in Paris, Beirut, Baghdad. Earthquakes in Japan and Mexico. Our thoughts are with them all. 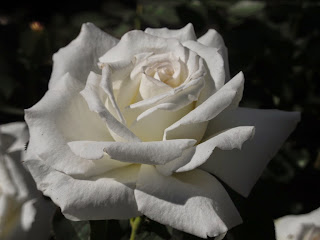 In terms of fantasy creatures, dragons are my favorite.

Specifically, I'm a fan of good dragons, whether they work with the heroes or are the heroes. Sometimes they're wise and sometimes they're less than intelligent, but both ways they speak of adventure and quests and ancient history. Whether it's Robin Hobb's self-centered creatures, who need flattery to cooperate and careful and diplomatic care to survive, or Mercedes Lackey's tempestuous but trainable dragons, or the sexy dragon men of Katie MacAlister's Aisling Grey series, they're fun and they're full of themselves.

Seeing the different takes on them is a joy of reading, playing, and watching fantasy. I think Anne McCaffrey's Dragonriders of Pern is one of my favorite takes on dragons, especially the dragonets. Ever since I first read about them, I've wanted a tiny, psychic dragon friend. (Although I'm fairly sure the cats are a close relation to dragons.)

Faeries, zombies, shifters, trolls, aliens, goblins, hellhounds... choose your genre, choose your creature. What's your fantasy creature of choice? And what's your favorite series with them in?
Posted by Rebekkah Niles at 10:00 AM No comments:

The Dear Author lawsuit filed by Ellora's Cave has been settled.

A court case about whether three JD Salinger books, now public domain in the US, can be licensed overseas has been moved to the home state of the current Salinger heir.  The Salinger Literary Trust makes the argument that the longer copyright protection in the other countries can be upheld; the publisher seeking to license the translations makes the argument that the shortest copyright protection should be used. Both arguments are based on the Berne Convention.

On the Futuristic, Fantasy, and Paranormal blog, how take your villain from mustache-twirling trope to fully-fleshed, worthwhile villains.  Or even the villain your readers will love (to hate).

Have you ever wondered how the QueryTracker database is kept current? QT reveals.

Which, as agent Jessica Faust points out, is very important for agency databases--be sure to check the agent's website before sending anything out. And if you're disappointed that it's taking a while for an agent to reply to you, you should probably glad she's waiting until she's hungry for a new client instead just wanting to clear out the inbox. She also shares a compilation of the top 10 worst pieces of query advice.


Agent Janet Reid offers advice and and answers questions. If you're trying to find an agent for book 2, how much of book 1 should you mention in the query? (None; you're querying book 2. Do say that book 1 is published, and whether or not the publisher has dibs on the series.) You've queried personal connections and have heard nothing; does this mean your book is bad? (No. Now go query someone else.)

An infographic  from Stop Procrastinating looks at a survey of NaNoWriMo writers.

GalleyCat collects their tips for NaNoWriMo from previous years. 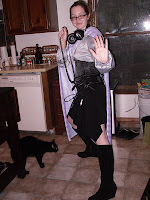 Halloween means kids in costumes and candy to me, and that makes it one of the cutest holidays of the year.

What was the best costume you saw this year (of any age person)? And what's your favorite Halloween candy?
Posted by Rebekkah Niles at 10:00 AM No comments: