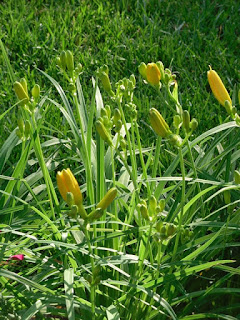 Early summer is the time for flowers.

Yes, in North Carolina, early summer sometimes starts in April, or even March in the years we "skip spring." That's only to be expected. Usually, though, early summer is May and early June.

By June, the summer lilies are everywhere, blooming and fresh and alive. You walk outside and it's a wonderland, a humid and sticky-aired wonderland averaging about 80 to 90 degrees F. Some people appreciate this more than others (I like hot weather.)

From May to September, you don't go outside without getting dewy (that's a Southern euphemism for "sweaty," FYI). And if you make it to the heat of the afternoon, in April through mid July you're likely to see heat-storms roll through, those flash thunderstorms that are lightning-filled and frequently laden with a good, drenching rain. By late July through August these become less frequent, more often than not sans the rain when they do hit, and filled thick with heat lightning that doesn't always hit the ground.

That's partly because the water gets cooked out of the sky. By late July through August and up to mid September, the weather hovers in the mid-90s (32-37 C), and in late August and early September hits the occasional 100 degree mark (or about 37.78 C). Even heat-lovers like me take refuge into the air conditioned indoors during the heat of the day. Of course, in NC it's still humid and sticky, because that's how we roll in these parts, but the summer storms aren't enough to alleviate the usual August drought.

We've got a saying for those long, dreary months of rainy spring: "We'll be glad for this come August." Because everyone remembers a drought. Everyone who has grown up here can tell you about the months where ponds wither into puddles, and the springtime hip-deep section of this lake or that lake is naught but a muddy, silty wish.

Then comes September, October, November. The time of storms, and hurricanes. Mid-September is when the first hint of not-hot reappears in the morning air, when sometimes the slightly spicy scent of soon-to-turn leaves plays calendar peek-a-boo. This game usually continues into October, sometimes right through Halloween into the wee hours of November (around here, those extra-long summers are what we call an Indian summer), but other years just dipping its feet into the pumpkin month, dropping the first actual chill into the air right on time for the State Fair.

In the hottest years, all those lilies are gone by late May. Usually we expect them to stay through June and into July, with the blight of heat killing green from late July through early September. But once September crawls back around, the golden wheat-relatives that sway in the place of grass beside the highways become dotted again with green, and pansies and mums begin taking over the flower beds.

What is summer in your region like?
Posted by Rebekkah Niles at 10:00 AM