First thoughts of Breath of the Wild

If you're a Zelda fan, it's no surprise to you that Breath of the Wild is pretty.

My husband and I set up two TVs side by side, so we've been able to compare the Wii U version with the Switch version. There is a noticeable difference. The Switch version is better textured, and the graphics just a bit cleaner and sharper, so if you're looking for pretty, go for that one.

That said, if you have a Wii U and don't feel like going in for a Switch, and your spouse is willing to forgo the pretty, bad-tasting toy, it's the same game, and the controls are similar enough that you won't miss out. So far the graphics are the only difference.

It's pretty open world in the beginning, more so than a lot of the other games in the series. Yes, there's a person pointing which way you should go, and there are defined limits to where you can go, but these limits are much broader than most of the series. And nobody's forcing you to get on with the plot. You want to go run around the forest cooking? Go for it!

That said, if you don't at least start the plot, disembodied voices do try to usher in that direction. Once you've gotten the first plot point down, you're free to explore. Your first four mini-dungeons are basically your freebies to learning the world. (I can't tell you what happens after that, since I've only finished three...) 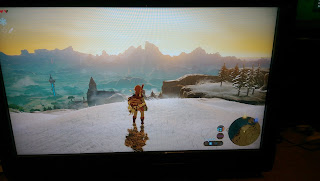 Also, hunting. You get to hunt down your own pigs and birds and turn them into steaks and drumsticks. And then cook with them. Link's cooking song is adorable. And since you won't find hearts lying around, you really should cook, because that's the only way to heal (so far).

You can also climb, and climb anything, which is honestly a bit freaky when Link starts scaling ice... You don't need vines or anything that looks like a "climb here" format. You're in control of your jumping with a button instead of an auto jump, which is bit different from the other games in the series, because really, no auto jump at all.

Equipping is an interesting affair because you have a lot of options (nothing beats killing an enemy with its own weapon, or better yet, the wriggling arm of a skeleton). But I'm not fond of the weapons breaking, which can be inconvenient in battle. I think I prefer having a little less choice in the weapons department, to be honest, and not having to deal with weapon after weapon flying into shards mid-battle. Still, it is fun and an interesting style of play, so once I'm used to it, I may warm up to it.

On the whole, after 5 hours, it's beautiful, it's fun, and I'm going to go back to playing until I can't keep my eyes open any more.