Grammar brigade: the verb "to be"


This post is dedicated to my readers studying the English language. Please answer the poll to let me know if this was a helpful post!

In English, all sentences must have a verb. The most basic sentence is "I am." To be is one of the most commonly used verbs.

I am cold. You are a leviathan. That is Charlie. We are the champions. These are all sentences. 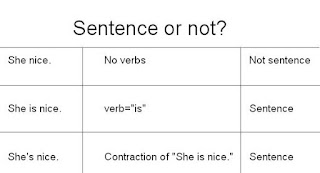 To be used in descriptions

The verb “to be” is commonly used for descriptions: 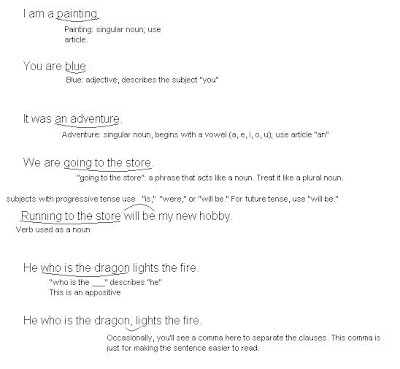 He is kind.
She is good at baking.
She is a good cook.
He who is king makes the laws.
They are the joy of my heart.
Life is the journey, not the destination.
It would be my pleasure.
I am cold.

It is conjugated as is, are, am, was, has been, and will be.

We use is, are, am, or was when we are talking about present tense progressive (see tensechart) or when we are describing a subject.

We use be when we are also using helping (or auxiliary) and modal verbs. This includes talking about the future progressive tense.

I will be singing when you come in. (future tense progressive)
I might be angry if you do that.
I can be a ninja for Halloween.

In English, only people are considered masculine or feminine (he or she). Everything else is an it, a neuter object. People may refer to their pets as he or she if the gender is known. Sometimes people will think of their boats/cars/treasured objects as male and female, but this is informal.

Articles are the, a, and an. They are used to say the number (one) of an object, and if it is a specific object (the) or a general one (a/an).

If you are describing a thing as an adjective, you will not need an article:
I am cold.
He is angry.
She is purple.
You are so cute!
It is old.

If you are describing something as a singular noun, you will need an article:
I am a cow.
You are the boss.
It was a giant.
She was like an apple. (simile- a type of comparison used in writing to show a figurative comparison. In other words, she wasn’t really an apple, but she looked like one.)

If you are describing something (or things) as a plural noun, you do not need an article:
We were kings.
They were like peas in a pod. (simile)
You all are crazy.

Prepositions tell you where or when something happened (or where it is located). Adverbs tell you how it happened. They aren’t usually considered when you’re trying to figure out whether to use is, was, are, were, am, will be, or to be.

It is frequently my fault. (frequently describes how often it is my fault. It’s an adverb, not the noun of the sentence.)

Things that act as nouns

Sometimes a word that isn’t a noun, or even a whole phrase, will be used as a noun. These have fancy terms like gerund. Basically, treat them like singular nouns. They usually do not need articles.

Who is is a clause that describes he. This is a grammar structure called an appositive. He who is is not very common in modern English, but still sometimes used in formal papers and often in older documents you might study. Appositives, however, are still frequently used.

Things that are blue include the sky, the water, and blueberries.
The man, who is my uncle, cannot be trusted.
The book, which is called Under the Sky, is my favorite.

Appositives further describe an object or help identify which of several objects you’re talking about. Check out my articles on That vs which, More whiches, and That. Yes, that. for more about appositives and when to use commas and that or which or who.

Basically, the idea is that something needs more identification (The car that is blue goes fast = there are cars that are not blue) or you want to describe something (I hate running, which is my mother’s favorite exercise = running is my mother’s favorite exercise, but I already have a verb in the sentence [running], so I use an extra clause to describe it).

If you’d like to see more posts like this, please take the poll and let me know what you think!