Ruins and Daydreams of the Future 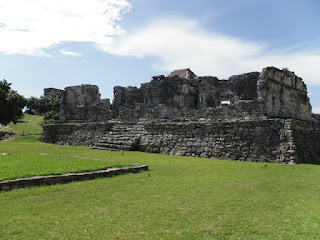 What's so fascinating about ruins?

I think it's the hidden possibilities. The questions that lay unanswered, the desire to meet the people who once stood where you do now, these things buzz through my mind when I look at ruins.

And I think it's also the curiosity. In a thousand years, or two thousand, what if our society is in ruins? Many of the ruins uncovered today weren't suddenly and horrifically destroyed: they were buried through time, through building over the past.

These are ruins in Cozumel. They would have been abandoned in the 15-1600s. I find myself wondering what, in four or five hundred years, my home will look like. (Being an apartment, probably mulch, but still.) What will my city look like in 500 years? Will it even be recognizable?

One of the greatest joys of science fiction is to imagine what the far-flung future will be like, but it's not just science fiction writers who do so. Given our technology now, and the advances we're making on a day-to-day basis, will our rate of growth increase exponentially with the population? Or will we hit another 'dark ages,' in which innovation slows down? Maybe in 2513, people will still be driving cars (powered by salt water instead of oil, but still cars). Or maybe we'll be riding bioengineered, photosynthetic horses that can gallop at the speed of sound.

What will people still be doing in 2513? How will they be doing it differently?