When you read a name in a book that has an apostrophe in it, how do you pronounce it? 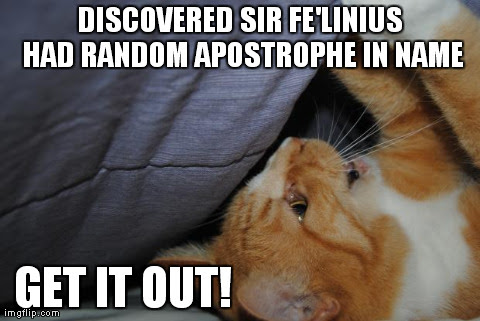 Apparently Friday was International Apostrophe day! So celebrate your apostrophes (by using them correctly and/or mocking incorrect uses). Personally I don't mind apostrophes in fantasy/science fiction names if they have a purpose to be there (I rather like Anne McCaffrey's use of them; it's perfectly logical). On the other hand, I'm a bit irritated by random apostrophes that follow no rules whatsoever.

Here's an article on how apostrophes worked their way into many real, modern names, such as O'Brien, and the use of them in character names in stories.

Personally, I rather like the idea of pronouncing apostrophes as "Boing." Because it's so much fun to say "F-boing-lar" or "O-boing-Conner" whenever I read them...

Er, or maybe not.

What's a comical misuse of an apostrophe you've seen recently?
Posted by Rebekkah Niles at 10:00 AM