On the Internet Archive Book Images project, where millions of images on copyright-expired books have been uploaded, there's a multitude of page artwork. (Note: not all the artwork is appropriate for all audiences, as I've seen graphic images from medical and surgical texts on some pages, and I would not suggest letting kids browse through it.)

The ones on the Flickr still have the page backgrounds visible, but like the Photoshop addict I am, I've played around with taking the backgrounds out from a couple (you can see them better on the Pinterest page below; sorry, didn't think about the dark background of the blog at first!). Most of the ones I found were from The Complete Works of Percy Bysshe Shelley (1904).

They're now public domain images (at least in the US), so they're useable in your own works, or just as a page decoration on some fancy stationary. Go on... you know you want to snag a few...

These are the ones I've played with so far. Probably add more to a Pinterest board over time. 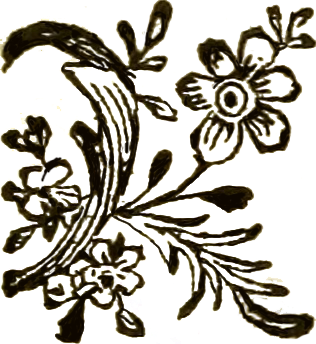 If you want to take a crack at Photoshopping some yourself into better condition, I found it helped to add darken the image a bit first, and slightly up the contrast. Then background-eraser was more effective and left less behind while not taking out as much of the ink, after adjusting for a higher tolerance level.  I did this for the two above; the flower to the right was done without, and as you can see the flower came out rougher (though to be fair, it started out in rougher condition, too). You'll still need to do a bit of final clean-up with an eraser, and I suggest zooming out to check if any of the white spots look like more like a case of faded ink, or ink bubbles when it was printed. There were a couple I filled in. I also smoothed out a couple of bumpy lines from the flower drawing to the right, though I left most alone to preserve the hand-drawn look.

(Edit: added new images below) Pixlr also does a pretty decent job, though it's a little rougher. It does have a smaller size requirement, so it's best if you plan to use the images small. The bottom was done first, and the top is an inversion of the bottom image so you can see it against a dark background.

Do you ever look through old books? What were some of things that used to be done for books that you wish we still did?
Posted by Rebekkah Niles at 10:00 AM