What would your town look like three years after being abandoned? 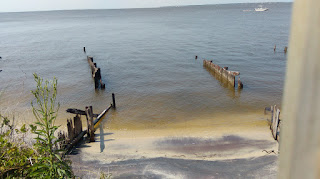 Writing Into the Tides made me think about what happens to places when they're left uninhabited for years. In the Tides, magic traps all the people of the South, leaving their homes behind. Three years later, Kelly goes to visit, and finds the slightly-creepy remains of empty cities and towns.

So what would your hometown be like? Would it be overgrown, would pieces of it have fallen apart? What would have survived untouched?

Docks might fall apart--but then again, they're pretty sturdy, so you might have some that were just fine. Or maybe your inland farms now grow more dandelions than wheat. And without human management, is anything still growing in your backyard garden besides mint and rosemary?

Roads would be cracked and timeworn. Kudzu would eat most of the roadsides and exposed powerlines, trailing up and over as it is wont to do. Maybe wild animals would be nesting in your bed--although if you're in the Broken Powers universe, there may be something nesting there, but it's probably not a wild mouse.

Old buildings are a great clue, buildings that have been abandoned and left unattended over the years. Plus they're pretty gorgeous to look at, even if I'm not keen on going into them and trying to stand on those crumbling floors. Although three years isn't all that long, it really takes less time than most people think for age to weaken an uninhabited building.

Have you ever wondered what your hometown would look like in a post-apocalyptic scenario, be it book or movie? What do you think would age well--and what ones wouldn't? Where would you go to seek shelter if you came back three years later?
Posted by Rebekkah Niles at 12:00 PM

Email ThisBlogThis!Share to TwitterShare to FacebookShare to Pinterest
Labels: into the tides