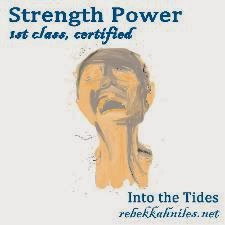 In the Broken Powers world, people with magic--Powered--have licenses describing what kind of magic they have, and how strong in it they are. But how does this work?

First- and second-class Powers, the strongest, are required to be licensed and certified. They must at all times carry their licenses with them, if there's even a chance of them actually using their magic. It's a misdemeanor if they don't, with a small fine ($100-$250 depending on the magic); but those working for the government may face employment repercussions such as training courses, write-ups, and endless reminders from higher-ups.

The reason for this is to build trust between government employees and the general public. Because first- and second-class Powers have abilities that can be possibly dangerous, and most are employed by the government (internationally this is true as well), showing the license to people who ask proves that the Power is operating under knowledge of the government and therefore will be held accountable. Although Powers in government positions are no less prone to corruption than their unPowered counterparts, they are scrutinized more closely than ordinary citizens, and are required to participate in more ethics-building exercises such as additional training and charity work. The few who are privately employed, or those who are working off-the-official-clock, must still meet continual re-certification and re-licensing standards, and those found violating the official ethics of the licensing program are arrested and prosecuted. Therefore, those possessing licenses are often considered "safe."

Sixth-class through third-class Powers are required to be licensed, but not certified. They do not need to carry their licenses around at all times, but third- and fourth-class Powers are supposed to hold them when performing magic in the line of work, regardless if the work is in private sector or at government levels. Fifth- and sixth-class Powers are considered insufficiently powerful to do serious damage and are not required to carry their licenses with them. All Powers are held accountable if found using their magic for unethical purposes, and using magic without a valid license (that is, the license has been revoked, never issued, or expired) is a felony.

Licenses must be renewed once every three years, with the completion of an ethics class. Certifications must be renewed yearly. This may be accomplished at the nearest Powers office, which in small towns is often located in the Town Hall or the Post Office. Major cities have larger, separate offices. There are no fees associated with keeping a license up-to-date, although replacing a lost one comes with a minimal $5 fee.
Posted by Rebekkah Niles at 10:00 AM